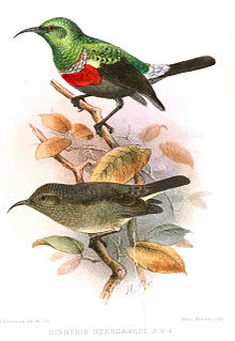 “We saw this tiny bird, about as big as my thumb, what could it have been?” someone asked me recently. That’s the kind of thing that happens when you have been dubbed “the walking encyclopedia”.

Of course that would have depended on various things like its bill, where it was seen, what it was doing – what birders call its “GISS” (General Impression of Size and Shape, ie its overall looks and behaviour). As it was I could not help, but out of interest I took out my Roberts field guide to see which are the smallest birds in southern Africa.

Then, out of sheer curiosity I looked for the biggest (heaviest). Nothing matches the ostrich’s fighting weight averaging 70 kg (the weight of a medium adult). Next is the king penguin at 13 kg, which occurs only on the sub-Antarctic islands. Next comes the world’s heaviest flying bird, the kori bustard at 12.4 kg, followed by the great white pelican at 9.5 kg, Denham’s (Stanley’s) bustard at 8.5 kg and Cape vulture at 8.5 kg.

Interesting to those keen on such things is that the Cape vulture is by a long shot the largest raptor in the region, bigger than either the lappet-faced vulture (6.7 kg) or lammergeyer or bearded vulture at (5.8 kg).

Other big guys with wings are the southern royal and the wandering albatrosses (8.2 and 8.3 kg respectively), wattled crane (8 kg), marabou stork (6.4 kg) and spur-winged goose (5.1 kg).