When I studied fynbos ecology with legendary Professor Eugene Moll, we would look across the Cape Flats from our study site high in the mountains above Bain’s Kloof Pass, and he would point to the highest peak on the saw-tooth outline of the distant Hottentots Holland Mountains and say (something to the effect of): “And that, you brainless hopefuls (for that is what we were, or worse), is the grail of fynbos ecology.”

The “that” he was referring to was Kogelberg peak, known to be the only home to one of fynbos’ rarities, the march rose (Orothamnus zeyheri), thought to be extinct till not so long ago. Today Kogelberg peak is the core of the Kogelberg Nature Reserve, the Star of Africa diamond in the crown of the Cape Floral Kingdom. It is also – the vegetation known as fynbos – a World Heritage Site named the Cape Floristic Region. 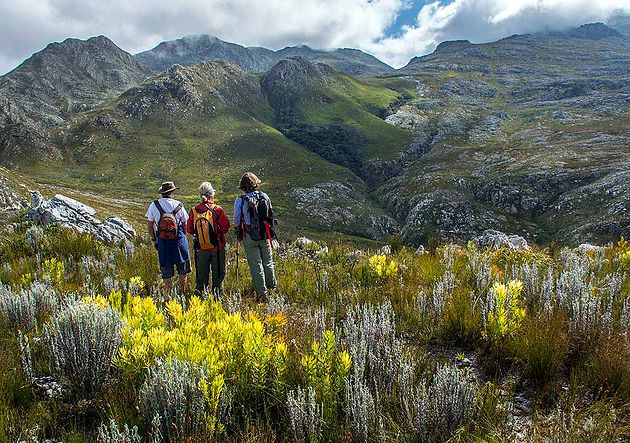 This world heritage status protects the prime remaining sites of this by far world’s tiniest, and richest by half (size for size) of the world’s six floral kingdoms. It consists of several mountain reserves spread across nearly 1,000 kilometres of the Cape Folded Mountains and which harbour the smallest yet most diverse (size for size) flora on Earth.

The Kogelberg is, if not the, then certainly one of the most important sites for biodiversity in the fynbos floral kingdom and a visit there in rain or shine, snow or dry, should be a bucket lister for anyone living in or visiting the Cape. The access is from the coastal road between Betty’s Bay and Kleinmond, in itself a must-do scenic drive.

On a day visit you could hike, mountain bike or kayak in the Palmiet River or simply wander about and smell the flowers. Finding the elusive marsh rose is an altogether other matter, but a hint is, they flower in mid- to late winter which in this part of the known universe generally means July and August, when tends to rain and blow or rain and snow.

There are several accommodation options in the reserve and the larger biosphere reserve, one of only 400 in the world, includes a large chunk of the coastal strip.

These photos by renowned Cape photographer Geoff Spiby offer a visual doorway in the splendours of the Kogelberg.