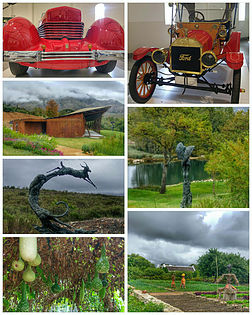 I think we were polishing off the third or fourth bottle of wine when one of the party piped up: “So take why don’t you take us (i.e. your friends) to some of places you take your touring clients?”

With the gauntlet laid down I put together my idea of the ultimate Cape Winelands tour, which we did last Saturday.

We started at the magnificent Dylan Lewis sculpture garden on the outskirts of Stellenbosch, where local guide Hanle Hill shared her expert inside knowledge. Although we had to rush the visit, you could spend hours there in wonderment at the artfully created environment, the breathtaking scenery and the overwhelming serenity. There is nothing else like it in South Africa.

From there we dashed over the Helshoogte Pass to catch the 10 am tour of the organic garden at Babylonstorenestate. It is inspired by the original Company Gardens in Cape Town, with all kinds of vegetal wonders that can only be revealed on a tour conducted by one of the gardeners. You are allowed to pick what is in season, the rest goes to Babel Restaurant alongside (for which you need to book months ahead). 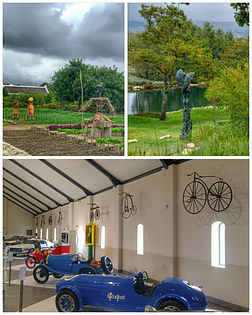 With two hours to kill before lunch – we managed to get a table at Babel – we raced off to the Franschhoek Motor Museum on L’Ormarins estate. Four expansive barns house a collection of spectacular museum pieces from the dawn of motoring to modern racing cars – and just about everything in between it seems. Don’t forget to look up and marvel at the collection antique bicycles; some appear to have fallen off the Ark.

Lunch was memorable as anticipated (lots of stuff from the garden), but some might consider it rude to put a 100 % mark-up on the estate’s own wines.

We had a long wish list of estates for tasting after lunch and managed to agree that Rust-en-Vrede was right “up there”. It was so good we decided to do the entire tasting menu and were there until closing time. We never got to Solms-Delta, Kanonkop or Meerlust, but there is always next time. Only 599 estates to go.

Just be warned that some wineries are not open on Saturdays, others close around midday and some around 14h00. You need to check to avoid disappointment. Rust-en-Vrede was open till 5 pm.